TJ Boulting is proud to present ‘Subversive Stitch’, a group show of textile-based works, incorporating embroidery, weaving, carpet, tapestry, clothes and sculpture. The title is taken from the 1984 book by feminist art historian Rozsika Parker ‘The Subversive Stitch – Embroidery and the Making of the Feminine’, and subsequent 1988 touring exhibition in Manchester at the Whitworth and Cornerhouse curated by Pennina Barnett. For centuries embroidery had been a craft most closely aligned with women, holding connotations of domestic and the feminine, and ranked below the fine art mediums of painting and sculpture. Then, in the wake of William Morris and the Arts and Craft movement of the late 19th century, and continuing via the Suffrage Movement of the early 20th, it made its burgeoning presence felt when empowered women artists harnessed its use, subverting the very medium that had previously defined their position in art and society. Today although it is still heavily, if no longer solely, a woman’s medium, its subversive legacy continues; embracing the political, the innovative, the technical and often unconventional, whilst redefining its status as a serious art form.

Through her tapestries and embroideries, artist and illustrator Charlotte Edey asserts the idea of the feminine space. She first draws and illustrates her softly surreal designs, then translates them digitally to the Jacquard loom to create her tapestries, before finishing with hand-embroidery. Her themes explore identity and the politics of space within feminine and unnatural scenes. Touching on modernist architecture and spiritualism, the spaces are punctuated with organic symbolism and miniature women of colour. Gal Leshem’s soft hanging fabric sculpture ‘And She is a Mummer and Queen’ takes its title from Natan Alterman’s 1957 poem ‘The Spinner’. In the poem, the labour related to fabric – spinning, weaving, sewing – is subverted as a tool for feminine self-determination, a negation of its traditional function within a gendered division of labour.

Gillian Wearing’s new edition, Courage Calls to Courage Everywhere, likewise draws on the reclaiming of embroidery as a feminist rather than feminine labour. Her handkerchief is embroidered with signatures, sourced from archives and reproduced in thread, of activists who fought for women’s votes alongside Suffragist leader Millicent Fawcett a century ago. (Fawcett herself is the subject of Wearing’s 2018 sculptural commission, unveiled in Parliament square to mark one hundred years of votes for women and standing on a plinth featuring images of the campaigners whose signatures are sewn into the handkerchief itself.) Suffragists and suffragettes had a long history of embroidering the names that couldn’t apply to an electoral role into textile pieces like this one, and the edition aspires to honour that tradition of craft and activism whilst acknowledging progress still to come. 50% of profits from sales of Courage Calls to Courage Everywhere are donated to the Fawcett Society, who still campaign for women’s equality to this day since their founding more than 150 years ago.

If the pen is mightier than the sword, then the needle itself wields its own visual power. Now in her eighties, Olga Frantskevich’s hand-woven tapestries recall scenes from her childhood in Belarus under German occupation. They tell vivid stories of friends and neighbours, widows and soldiers lost to war, her brightly coloured child-like scenes punctuated with traumatic memories.

Tate Modern’s recent Anni Albers (1899-1994) exhibition, curated by Ann Coxon and Briony Fer, demonstrated Albers’ role as an important artist in Modernism through her weavings, which she began in the 1920s Bauhaus workshops and developed through her exposure to ancient Latin American weavings once she moved to the US in the 1930s. These early civilization weavings and textiles that Albers immersed herself in can be seen as a form of communication, coding and language. Lilah Fowler, who is interested in our geopolitical space within today’s digital culture, worked with a computer programmer to produce custom software that created unlimited and unique digital patterns. Learning the technique of Navajo weaving, she first created hand-woven rugs from the digital information of hundreds of generated patterns, and then used a digital Jacquard loom. Early looms were often seen as early computers, in the way they read information to weave designs via holes punched in cards.

HelenA Pritchard’s compositions meanwhile echo Albers in her formal use of the grid, the vertical and horizontal of the warp and weft of woven strips of discarded canvas, and her interest in harnessing materials such as plastic and mesh by incorporating the ready-made packaging of fruit and vegetables.

The excess of images, goods, currency, and the contemporary problem of algorithm-generated Tweets that stir our consumer and political choices inspired Yelena Popova to produce This Certified That – a code generated computer performance commissioned by Nottingham Contemporary in 2016. The work was influenced by the history of a largest political forgery: at the end of the 19th century a group of anarchists around the photographer, engineer and inventor Leon Warnerke, attempted to crush Russia’s (and with it the world’s) economy by flooding the market with an excess of forged banknotes. The computer code infinitely generates up to 60 images per second with their elements constantly evolving in potentially infinite patterns following the banknotes denominations from 5 to 500. The jacquard woven tapestry produced a year ago is based on a single screen shot dated 29.03.2018 exactly a year before UK leaves Europe.

Softness of form and colour in the wall-mounted collage of carpet offcuts by Bea Bonafini are inspired the Neolithic cave paintings found in the Sicilian island of Levanzo. The intertwined forms of ‘Shape Shifting V’ move concentrically and from human to animal, recalling the urgency of hunting scenes and spiritual imagery painted on walls in the darkness of hidden cave chambers. The use of carpet being transferred to the wall and hung as an artwork also challenges the expected use and display of an everyday, functional material.

Marianne Thoermer’s jumbo threads spill out of the knotted field like a stream of colour bridging the boundaries of installation, sculpture and painting. At times the shaggy surface connotes a bacterial outgrowth colonizing the expanse. It reminds us of the contents of a petri dish – a microscopic world amplified to extended proportions, spilling and leaking out.

Carolina Mazzolari’s series ‘Emotional Field’ is a complex system of symbols and techniques within her intense coded embroidery that envision and portray nuanced emotional and psychological states and thus create a kind of map of the unconscious. She designs the work then passes it to be embroidered by prisoners that work with the charity Fine Cell Work, who teach them high-quality needlework in order to boost self-worth, instil self-discipline, and encourage them to lead independent, crime-free lives. They provide paid, creative and productive work to prisoners around the country. Mark embroidered Emotional Field LOVE.

‘Entangled – Threads and Meaning’ was an exhibition held at Turner Contemporary in 2017 and curated by Karen Wright. Featuring all women artists, two of them are also included here. Judith Scott (1943 -2005) had an incredible intuition for working with threads and fibres in her sculptures. Born with Down’s Syndrome at a time when little was understood about care, she was institutionalised for thirty five years until she was rescued by her twin sister Joyce and enrolled in an art centre in California to support those with disabilities. There her innate talent for thread and sculpture was discovered, and she continued to create art prolifically until her death in 2005 age 62. Here we see one of her trademark woven and wrapped found objects cocooned in brightly coloured threads. Icelandic artist Hrafnhildur Arnardottir / Shoplifter works with the brightly coloured fibres of synthetic hair to create sculptures and wall-pieces that incorporate a playful and often humorous narrative (like her bright yellow ‘Smiley’) using traditional handcraft techniques like knitting, weaving, and braiding to create new forms of textiles, while referring to established methods in art. She is attracted to the playfulness found in folk art, naïvism, and handicraft which all have a strong influence on her organic process of creating work.

Clothes harness several ideas of the subversive for artists. Amanda Ross-Ho’s over-sized T shirt is at first glance humorous, she is known for often playing with the scale of the objects she uses, unsettling our sense of proportion as well as adding an edge of melodrama and the unnerving to a giant paint-splattered t shirt hanging on the gallery wall. James Merry is an artist working with embroidery, inspired by nature and the flowers of Iceland where he lives. He sources vintage sportswear with recognizable logos, and encroaches on their consumer symbolism with delicately and painstakingly embroidered flowers and leaf tendrils, the time taken to embroider each work similar to the time nature takes to reclaim old buildings and surfaces, a symbolic resistance of nature against the sprawl of cities and human chaos. He also creates the head-pieces for the musician Björk, who he has collaborated with since 2009.

Celia Pym was shortlisted for the Woman’s Hour Craft Prize in 2017, and invited members of the public visiting the V&A to bring her garments to repair, darning their holes with brightly coloured threads. It fell into the series of ‘Mending’ projects she has hosted before as a way to meet strangers through their clothes and discuss care. They brought sweaters and socks and jeans and scarves, hats, gloves and blankets. She repaired the holes visitors brought and then copied and cut them onto an intact tracksuit, socks, hat and gloves. She mended 94 garments. A pattern of heavy damage on the shoulder and both left and right elbows and back of forearms, at forefingers and thumbs, and on heels emerged like a map. 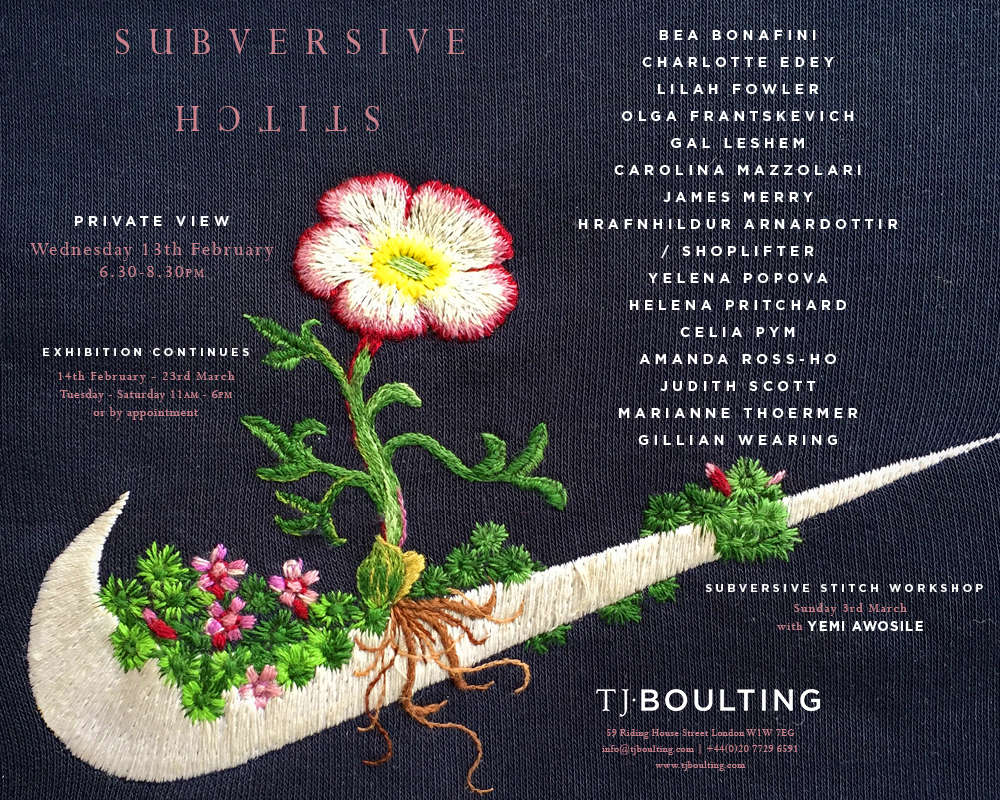 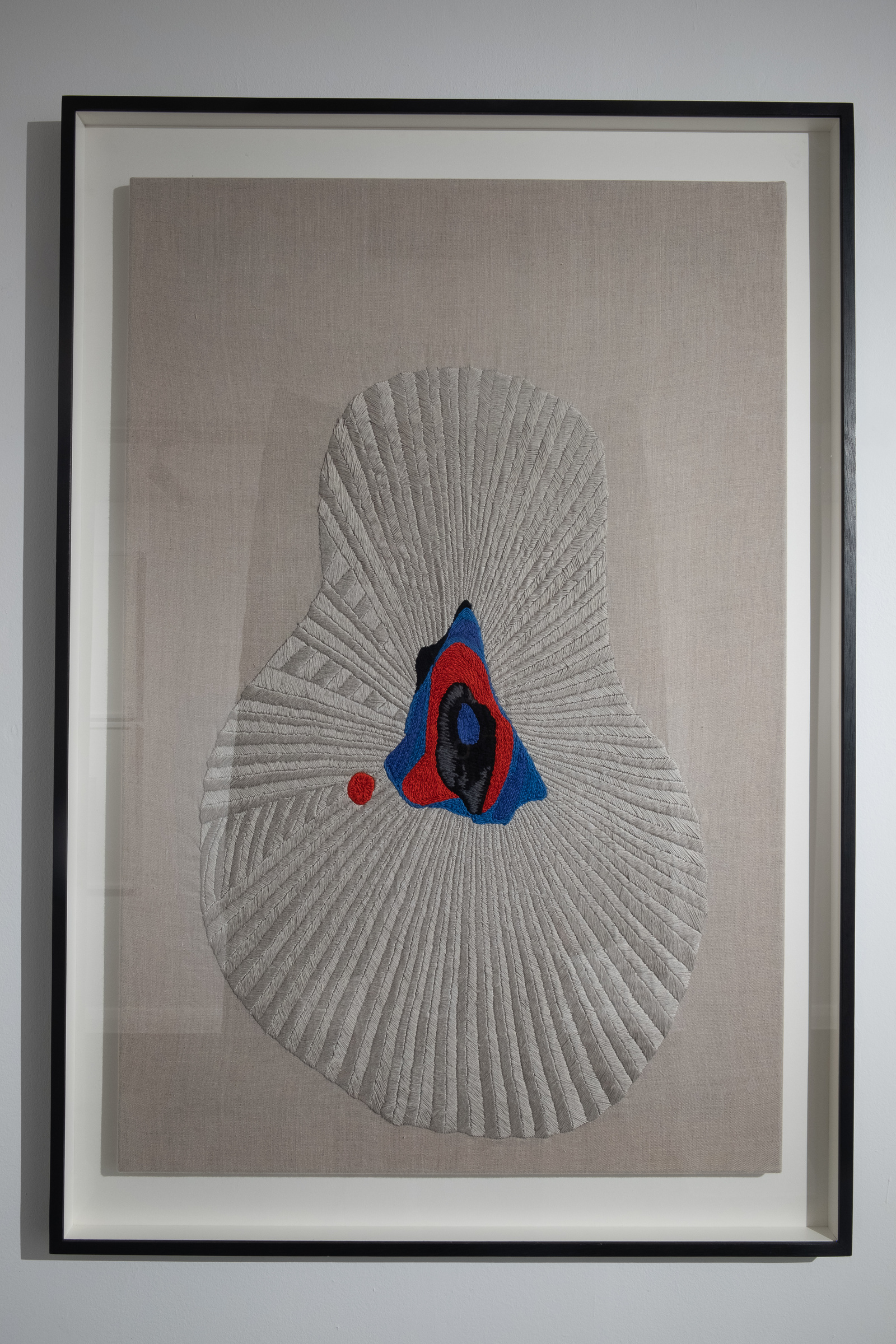 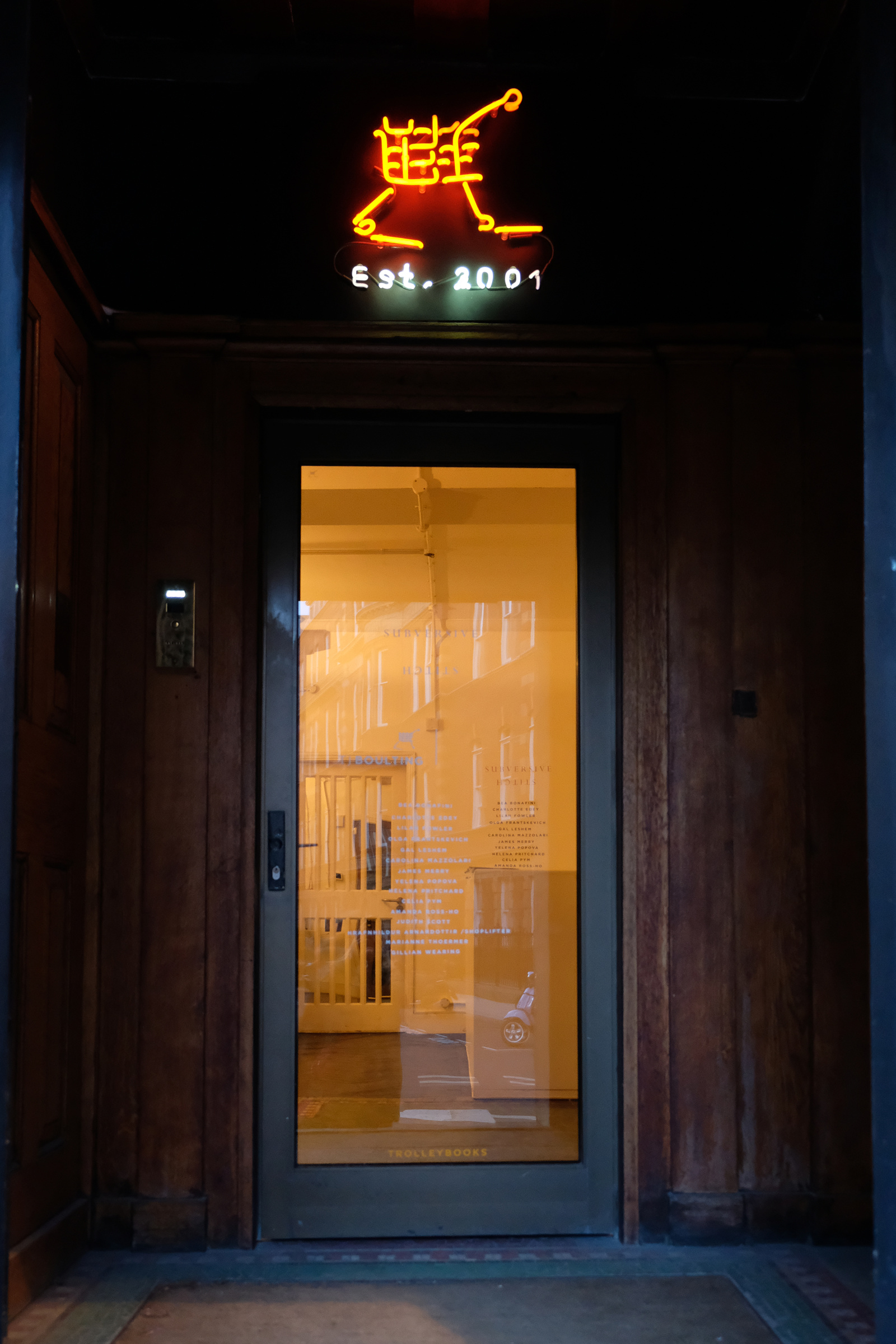 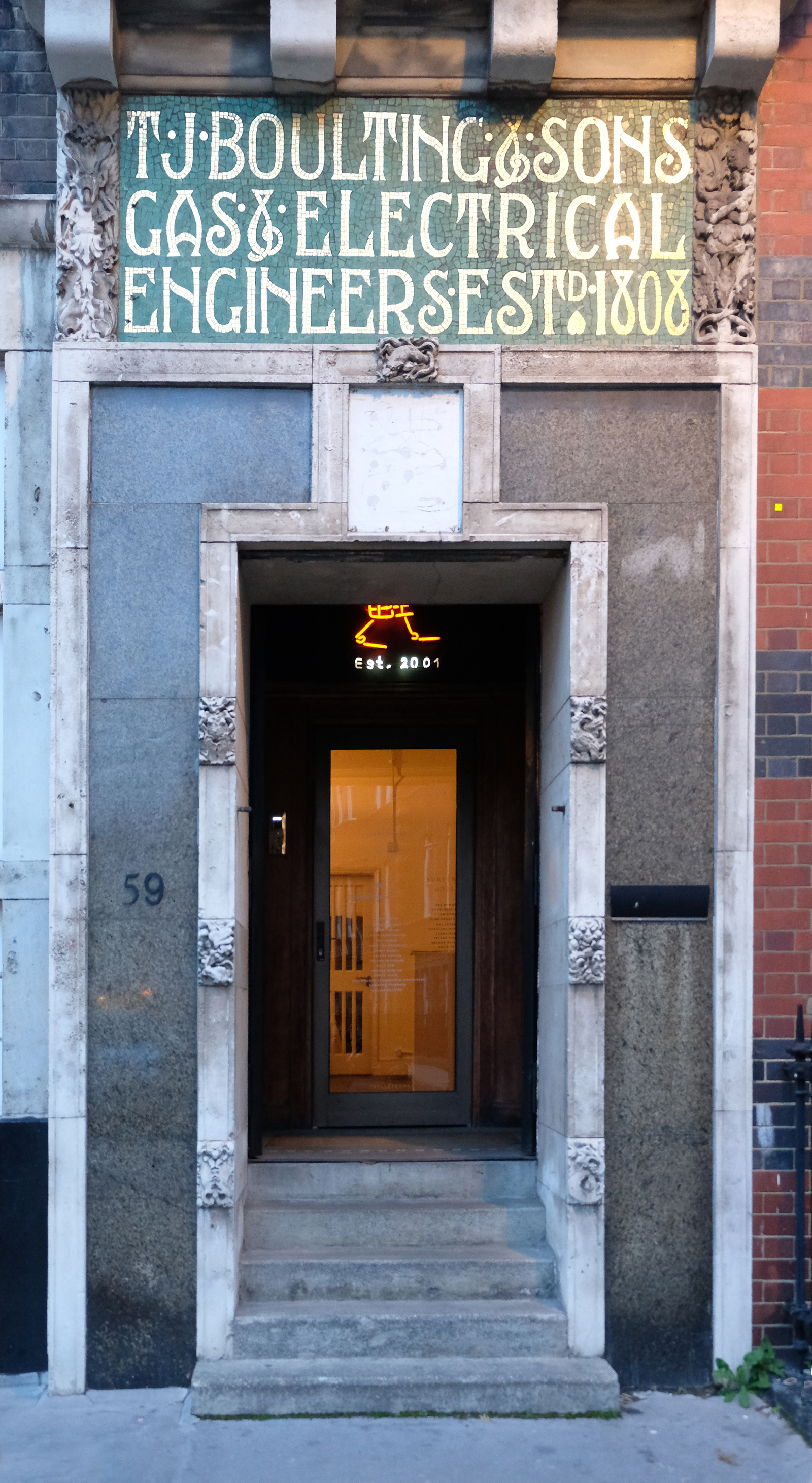